So I got myself an iPad 2, to be precise the one with integrated 3G, in order to be connected everywhere.

Why, you may ask, did I do that? Why didn’t you buy a nice honeycomb tablet?
Or a MeeGo tablet, like that good old WeTab? Well, first of all, I have been noticing that I have noticed that I have become real picky about bad usability, and Honeycomb IMHO isn’t that great in terms of that – and as I felt like I would need 3G for my use case, the otherwise o.k. HP TouchPad didn’t seem exactly suitable.
Besides, I am now in the media business and at least as far as the German market is concerned, the iPad is currently THE content platform – almost the only. 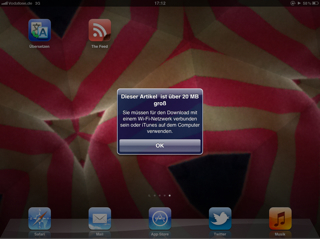 When I unboxed it, I became very excited, after having installed iOS 5 on this device, I knew I had entered the often mentioned reality distortion field, that Apple devices are known to impose on their users.

Right now, as I am writing this, I am less than overwhelmed, as I stumbled on a few annoyances, despite those that I expected anyway (iTunes, being forced to spend money in the App Store to have an usable device after all, there isn’t even a voice recorder preinstalled), and so on. The most annoying thing I stumbled upon: if an app (or media file in iTunes) is larger than 20 MB, you will be forced to download this over WiFi, which simply doesn’t make any sense to me at all. I can’t understand why this is so, as downloads in the browser work nicely without any hassle, no matter how large the requested files are – while a warning would certainly be nice to those with a very limited data plan, being forced to find a hotspot near you is a real PITA.

On the other hand, everything is really smooth. I had a few apps that didn’t work too well (itself or in combination with that new split keyboard), some even crashed, but that maybe related to the new features and thus changes Apple introduced with iOS 5. In general, everything’s smooth, and those Music and painting apps are something I’ve been longing for for quite a long time, so I really enjoy that.

But then, there are those mixed feelings again, because of all these limitations, the fact, that I miss certain open source apps and know that it’s virtually impossible to ever use them on this device (more unlikely than it would be on Android, whether it would even be easily doable on the HP TouchPad using the homebrew software Xecutah) – I don’ t really know whether I will actually keep this tablet, which doesn’t lead the tablet market for no reason.

I will keep you updated about me and my iPad – don’t worry, it won’t be more often then, say, monthly.