Well, this is really happy easter. Yesterday I got my MDA Pro (HTC Universal) and I finally got some read out firmware of A910i. Merci beaucoup, gama!

Ok, there are (as always) some bad points. I tried to run Linux/QTopia on my (still T-Mobile branded, but unlocked) MDA Pro, and I always get some “Kernel panic”message, what makes me kinda sad, as Windows Mobile isn’t that good, IE for example is just a horrible browser. But the device is a nice one, it is huge and heavy, but the keyboard is just wonderful.
I think I’ll flash it to some english “Crossbow”, and maybe I’ll be able to run some Linux on it successfully (though the error might be due to my 4GB SD (not SDHC) card… but I don’t know(BTW: does HTC-Linux support SDHC?)).

The bad point on A910i firmware, is that I don’t have much sparetime ATM to really work on a FW… I might have time for trying to flash my A910 with parts of that A910i FW, but that’s it, due to lots of University work.

I wish you all a happy easter!

[Boot messages of my Universal before Kernel panic:

And (repeated installation on “Crossbow”): While creating the “partition” I get a warning: “Invalid tar magic”
] 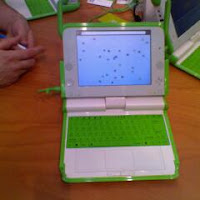 I have to say that when I arrived at my parents yesterday evening, I was really tired. Somehow these fairs are really killing me, I guess it´s all this stuff, all these people and the noise.

I don´t have to talk much about interesting Linux-powered smartphones, as I didn´t see any. Wistron NeWeb was there, but they didn´t show their GW4. The other stuff was quite boring, though hands on (e.g. Sony-Erricson Xperia X1) is always nice.
Concerning “UMPCs”, I was able to get my hands on EEE-PC (at ASUS they where running Windows on it…), Via Nanobook (at Linpus) and OLPC XO (OLPC Austria was a part of Linux Park). It was really nice to play around with XO, which is a really great engineered, beautiful device, though I soon realized that the keyboard isn´t made for my hands.

As some of you might now, tomorrow CeBIT in Hanover will start. As I got a free ticket, I am looking forward to visit it (I’ll visit my parents and Hanover is on the way), as I already did in 2002. While my focus back then was on PC hardware like fast and affordable mainboards and stuff, my focus this year will be mobile devices, exspecially those running linux.
Of course it won’t be that interesting – MWC in Barcelona is much more interesting… – but nevertheless I’ll try to write up a little CeBIT Mobile Linux Coverage, e.g. I’ll have a look at what WNC is showing, HTC will get a visit, too – of course Asus because of EEE PC.

As I was looking for some information about Mobile Linux on MWC, I found this roundup by ZDNet.co.uk [Part1] [Part2]. It contains information about LiMo-Foundation and their members and – of course – about Open Handset Alliance / Googles` Android platform, not much I didn´t notice before, but it is a nice roundup about the future of commercial Linux on mobile phones.

If you are interested in “really open” stuff, you might be nontheless dissapointed, but these videos are not for an FOSS fanatic audience, so that is ok.

[Concerning Android at MWC you might read this nice roundup by one of the best websites about mobile phones..]

ATM I am a bit dissapointed about my E2831s lack of an VPN-Client which makes me unable to use WiFi at university – and I won ´t have the time to work on this in holidays. A910i appears to be not to be bought by geeky people yet, so it`s firmware hasn’t found it’s way to me, yet – which means that the relatively easy “put VPNC on EZX” option does not exist.
And as I am looking for a real keyboard, I might purchase a HTC Universal, which is said to be a nice test device for QTopia, Openmoko and such. Maybe that would fullfill for my demand for a smaller mobile “PC” (mine is 15” HP NX6325), too…. And I always wanted to have a look at “Windows Mobile”, didn’t I ;) ?

No, I don´t have ANDROID on my phone, i don´t know if everything works yet, but some people of E28 ported it to this device, as the guys of phonemag.com found out at MobileWorldCongress (i´m not there, but I´ll be at CeBIT).

(Maybe I´ll write more on that subject later, but ATM I have no time…)

After my angry post about the Software of existing Linux phones, I want to write down my expectations for 2008.
It´s been really interesting to watch the stream of announcements during the last months, just to give you a few keywords: OpenMoko, QTopia becomes OpenSource, Android, Azingo… Nokia buying Trolltech… …

Quite a lot going on, and we can expect, that there is a new kind of jungle growing like the jungle of Linux distributions on the Desktop – but as cellphone/smartphone market differs a lot from PC market, it will be really interesting who will be really successful as there are many factors:
Hardware producers, Operators, the OpenSource community… and, last but not least: consumers.

Why do I put consumers at the back? Well, they are very important for success, as they are “creating” the demand for phones, but: I don´t know many people that really use their phone for more then some calls and SMS, listening to music and playing some funny Java games.
Do you need a Linux based phone for that? Sad to tell, but if you aren´t a kind of geek, you don´t – and I think that is the reason why the two manufacturers I was angry at created there phone stacks as they did: Let´s have Linux as a cheap platform that decreases RnD expenses and looks just like other phone interfaces do, is quite adjustable for us, has a nice JavaVM for additional “software”.
Somehow in 2007 the market changed a bit in this point, I really think that the iPhone showed people (consumers and developers) that you can do more with a phone than that I described a few lines above (not because the iPhone is that great -I don´t want to talk about it – but maybe because of Apples´ great marketing). Operators like(d) that, I think, because Mobile Internet is a thing they´ve tried to push for a long time, but besides of businessmen and geeks nobody really used these services.

Let´s go back to the beginning of 2007: OpenMoko was already announced, Apple announced the iPhone (and you could hear a “big bang”, long flamewars in forums about mobile phones).
Then, in autumn Motorola announced MotomagX (with a linux SDK(!)), GPhoneAndroid was announced.. and in 2008 this happened: Nokia bought Trolltech (and Motorola annouced to switch over to GTK, which is also preferred by LiMo-Foundation, OpenMoko and others (GTK and WebKit appear to be big players..)) and there are several announcements of new platforms or phones based on Linux every week, we can be absolutely sure that there will be a bunch of Linux phones in late 2008.

But who will win? Well, it depends on marketing, operators and consumers, and I really think that Android will be quite a success (what doesn´t mean that I like it) as there are many powerful companies behind it. Motorola.. well, we can´t even be sure whether they will continue to build mobile phones (I can´t imagine a cellphone market without them, BTW) and they´ve got a multiplatform strategy: Linux (Android (maybe on announced new Qualcomm powered phonesm as QC is an OpenHandset member) and LiMo), Symbian UIQ, Windows Mobile and a little bit of there own old proprietary os, some other cheap solutions, exspecially aimed to bring 3G technology to the poorer parts of the world.. OpenMoko, I hope they´ll be able to gain some market shares big enough to survive, as I really like there open philosophy and as they´re completely right, that phones will be pocket computers (in a better way than “PocketPCs”).

There will be much innovation in the market, I can imagine an x86-powered Smartphone in 2009, and lots of ultra ultra mobile computers with fast data services and big bright screens, which will hopefully have good enough power management to be useful as a mobile device.

Today NiZoX was so nice to point me to the fact that Neuf Cegetel has released a new phone: The Motorola Twin A910i.
It appears to use SIP and might even enable users to use inbuild Wireless LAN to surf the internet, what is really great, as this doesn´t work on the A910s that are out here, yet.

So I´m really looking forward to get my hands on the firmware of this device, I´m quite exited, as I believe that the hardware is the same.

If you´ve got an A910i want to help me, please get this tool, install it on your A910i (copy it to SD, choose the file in inbuild filemanager and it should install), run it, upload the files (maybe at rapidshare) and leave me a comment. Thanks!

Sounds bad. But if you ask me, it´s even worse. What the h*** he is talking about? Right. Linux software stacks.

There are some companys out there, that are selling Linux powered phones. I know the results of this for Motorola and E28, and, if you want me to be honest, they didn´t their best.
No SDK, weird platforms… But why?

Some people say, they do it like that, because the operators want it like that. Ok, maybe. But: It´s possible to install software on mobile phones powered by Windows Mobile or Symbian.
So what is the reason to cripple nice hardware with a bad software stack, as there are other ways to go (as FIC/OpenMoko and maybe Android show)?
Maybe it´s to hide insecurities. Or incompetence.

We should really free these phones.

(I was angry while writing this…)

The E2831 arrived today morning.
It´s a really thin and light phone, nice to hold in your hand, fingerprinty.
The hardware´s OK, the software… well, it is nice software, somehow, but it´ll be really difficult to install additional software to start in gui.
But there is something, that is even worse: I´m unable to telnet it (up to now at least) – and because of this I´m unable to unlock it.

I believe that an alternative software stack for this device should be relatively easy to create, as QTopia supports the inbuild OMAP730 – and the kernel support should be good as well. Only problem: I´m unable to do it, as I am no hacker.

Well, I´m pretty sure that you´re able to guess, what i did.
I just got my self another Linux-based cellphone.
Yes, it supports WLan.
Correct, it is the E28 E2831.

It isn´t here yet, I assume it is on it´s way to me from france.
Needless to mention I´m exited.

Having had a first look on the devices firmware, I have to say, that applications development for this device will be even more difficult than it is with Motorolas EZX-phones.
The applications appear to be packed in *.elf files, and I found now librarys sounding like they would belong to GTK or QT. I found traces of “Montavista”.. but that isn´t a real surprise.