While the Crowdfunder for the Librem 5 successfully finished, I want to shed some light on possible alternatives to it for people that want to run GNU/Linux on Smartphone hardware. First up: postmarketOS

Target devices:
Instead of other attemps at getting GNU/Linux onto smartphones, pmOS aims to target multiple devices with small device specific parts and a set of software that then is interchangeable between multiple devices. It is based on Alpine Linux, a distrOnly recentlyibution designed for “power users who appreciate security, simplicity and resource efficiency”. Currently, 17 devices are supported (not counting QEMU targets) and in various states of support. The best supported devices currently is the good old Nokia N900, as it pmOS can stand on the shoulders of giants here with regard to mainline Linux support.

Approach:
There is not one interface, due to a modular approach of pmOS and in order to support devices that are less capable. Currently, supported interfaces (more a “will be” than an “are” statement as far as I good gather) include good old Hildon (known from Maemo) and Plasma Mobile.
So, to boil it down: Device agnostic, UI agnostic, open and friendly.

Purism has now launched the campaign to crowdfund their smartphone, the Librem 5 I was writing about recently.
They ask for USD 1.5 Mio. Perks include a developer kit at USD 299 scheduled for June 2018, and (of course) the Librem 5 priced at USD 599, scheduled for January 2019.
The campaign will continue for 59 days, which (if I am not mistaken) makes October 23rd the last day of their campaign.
Note that the Crowdfunding happens on their own platform, they are not using Kickstarter or Indiegogo.

Recently my feed reader delivered the news to me that ten years had passed since the release of the first Openmoko phone, the Neo Freerunner. For this occasion, two people, Michael Lauer and Harald Welte, then involved into the project have written special blog posts. END_OF_DOCUMENT_TOKEN_TO_BE_REPLACED

While I am quite bored with most new tech announcements (especially smartphones), I realize that I still care most about small affordable laptops or convertibles. Tablets are great, I enjoy Apples iPad Air, but it has its limits, and so do Android tablets – limits in productivity. Of course it is entirely possible to do blogging or almost every other task that doesn’t require special business software on a tablet – but it just isn’t a great experience. Well, most likely it is just unwillingness to adjust – when you can choose between using an application that you know since almost forever, or a new app, that maybe is – at least for the advanced stuff – a little complicated and does not grow on you within minutes, then you might find yourself wanting the experience that you are used to. At least that’s the case with me.

As the headline says I am still using my Samsung ARM Chromebook with 3G. It is my main laptop now, which seems strange, given the fact that an iPad Air or the LG G2 most likely deliver better (benchmark) performance than this laptop. And then there is this OS – Chrome OS. Well, nah – I mostly boot into Arch Linux ARM running from a 32 GB SDHC card. I made it so that it is almost just as user friendly1 and has a broad set of applications I am used to2. While it is definitely not the fastest computer under the sun, it performs decent enough – the keyboard, the touchpad, the screen, the overall performance – nothing is really top notch, but it is more than good enough for me. BTW: The killer feature is, still, the following: No fan = no (constant) noise.

While it is great to be able to take the SDHC card out of the Chromebook, boot it into Chrome OS, launch guest mode and hand it over to a random person in order to provide that person with a way to access the internet, it feels decidedly hacky. And I like to have the robustness of Chrome OS at hand, which BTW evolved notably since mid 2013. But then the real question is: Would I purchase another (next gen) ARM Chromebook, like one of the announced and soon shipping “SAMSUNG Chromebook 2” with 8-core Exynos?

The answer is: It is unlikely. While – as mentioned above – most things work, getting an ARM-powered laptop set up to work a 100% fine with GNU/Linux seems almost impossible today. Rather essential stuff like standby is hit and miss, from time to time my Chromebook doesn’t wake up properly. Accelerated graphics (I am not talking about gaming, but much rather of video playback) or using a newer kernel: Painful to impossible. And as fanless Bay Trail netbooks/subnotebooks become available out there, that – depending how well the UEFI plays with Linux – are supposedly almost painless in that regard I would rather go for one of these if I had to upgrade.

I like my Chromebook, but if I feel like doing something that feels a little like actual work, I prefer to have a flavour of GNU/Linux. Therefore I installed a local chroot using Crouton – which brings me into a world of LXDE, Libreoffice and Firefox.

All of this works pretty well, but sometimes I feel like printing a document in order to do actual proof reading1. This always worked as I have a modern Epson AiO solution that is supported by Google Cloud Print, but I had to change back and forth: Make a pdf, go to Chrome OS, open the PDF, print it. That is not too bad, but it isn’t to convenient. So I tried to install the printer on Linux.
END_OF_DOCUMENT_TOKEN_TO_BE_REPLACED 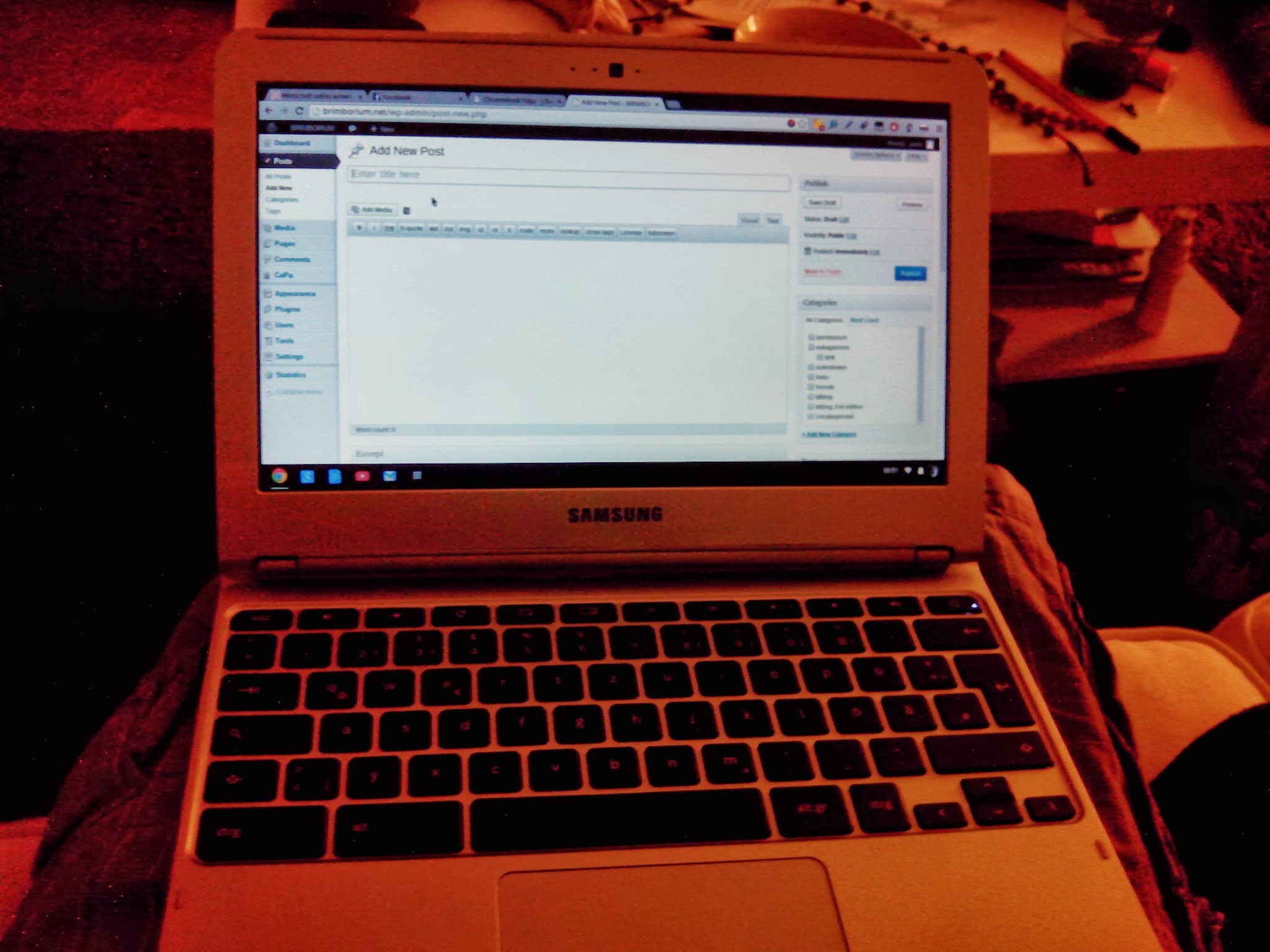 The evening before my final exams1 I bought a Samsung Chromebook, to be precise the 303C12 A012. It was one of these eBay bids which you do when you are nervous and try to get your mind of things – 210€ for a Chromebook, which retails for 299€ in Germany3 is what I consider quite a deal. But that’s not so important.

What do I think of the device? It is a great little laptop. Keyboard, Display and Touchpad seem better to me than the ones of my Lenovo Thinkpad Edge E320, which wasn’t exactly super expensive either, but still, this is impressive. Then there is the software, which is beautiful, but not too feature rich. Chromebook still lacks a few apps for me, but it is pretty much ok, and I knew before that it would be difficult to do the switch. And then, there is always the option to Crouton and have “a real OS” like Ubuntu.

What is disappointing though is the following:

Maybe I will upgrade to the 3G version, but even with Germanys 2nd best mobile network, Vodafone, you face some offline time here and there. So many of the problems described may remain.

Still, it’s a good first impression with plenty more to figure out and even more to try out.

There is not much to write about this years Computex, as almost every news has spread a thousand times throughout the web. This is thus more a personal note: Intel have finally managed to win quite a few smartphone and tablet designs, and at the same time they have managed to really lower the consumption of their performance platform with “Haswell”. Finally, thin, light, powerful and long lasting mobile computing solutions are possible. Thumbs up!

Jolla, that group of ex-Nokia employees working on an ex-Nokia smartphone OS (MeeGo, which is now “Mer” – and on the foundations of Mer Jolla built their “Sailfish OS”), have finally announced their first piece of hardware1, which will ship “at the end of this year”.2 It’s nothing too funky, hardware wise, but Jolla is about software, anyway.

Here’s a first Hands On with engadget: