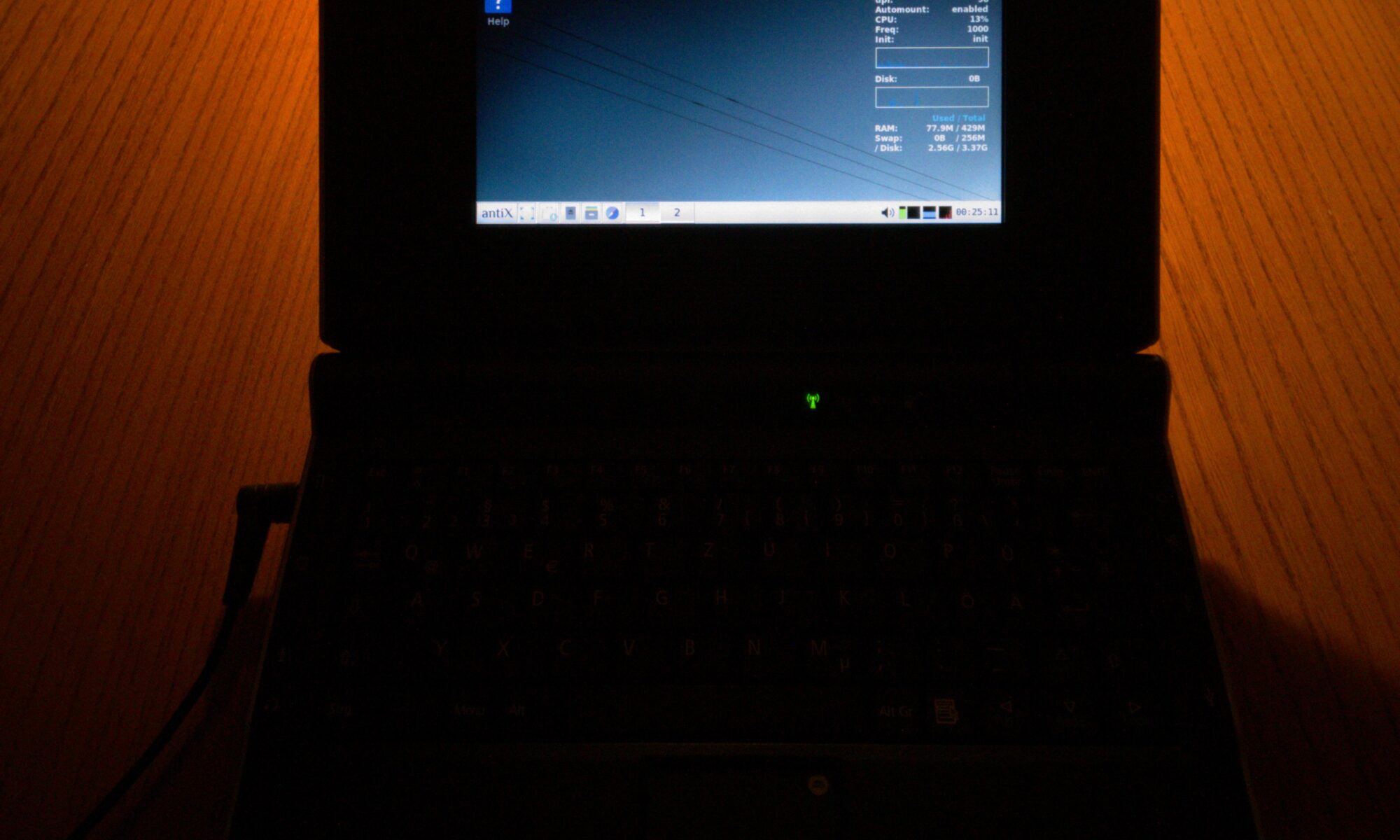 Sometimes I’m fancy and think I know better—or at least, I think that getting the obscure 3rd-party product could be more fun, than getting the No. 1 in the market. Back when the Netbook hype was just building around the ASUS EeePC, I did just that: I did not opt for an Intel powered machine, and bought a little mini-notebook based on the Quanta IL1 design, featuring a VIA C7-M CPU instead.

Honestly, the biggest surprise (after the fact that it still has an article in the English Wikipedia) about this device is that it somehow managed to find a place in a cupboard at my parents and thus is still around. The battery is dead, but … the hardware still works. For a long time, it still had an old Debian Sid install, which I then at one point replaced with Haiku. Sadly, Haiku ran great from USB, but would not boot after being installed on the 4 GB of dog slow flash storage. Sad, because as a portable device with an Ethernet port, it can still serve as a “let’s see what’s wrong with our network”-device—there’s no USB Ethernet dongle to be suddenly gone when one needs it. So I decided to spend some time on trying to get it to a somewhat operational state again, late at night, as a side project.

Running a Linux distribution on an old netbook can be a daunting task, especially when you consider the limited resources of these older machines and that many distributions have abandoned 32-bit X86 a while ago. An additional challenge when running Linux on the One A120 is its VX800 S3 integrated graphics card. Many distributions may not boot properly or may not run smoothly due to this: I sadly did not write down what did not work, but I recall that grml and S15Pup definitely did not manage to boot into a graphical session in a reasonable time frame.

I had some success with Alpine, which was installable and ran fine, but I struggled to find documentation on setting up a graphical environment—I’ve since found this blog post detailing the process on different hardware, in case you’re curious. Eventually, after trying to get startx going on Alpine for two hours, I gave up and tried Antix. Ironically, I found it on obnoxious Distrowatch!

Antix is a Debian-based distribution designed to run on older hardware, and it comes with the lightweight and efficient IceWM window manager (jwm and fluxbox are also installed by default). It booted! The installer worked! It even ran somewhat smoothly on the limited hardware of this mini-notebook!

One of the great things about Antix is that it is minimal enough so that less than 100 MB of RAM are being used on a fully booted system with IceWM. You can adjust the settings (if you like editing config files, that is) to further optimize usability—I recommend adjusting dpi and font sizes in order to make more of the tiny, low-res screen. Additionally, Antix comes with a wide range of software packages that can be installed, including web browsers, office suites, and multimedia players. But, given the nature of today’s web browsers, you’ll find that using Seamonkey, which is preinstalled, is not the best option on the One A120. It barely launches. I installed dillo and netsurf, and they run well enough on the device, if you stick to the limited subset of websites that work with these lightweight browsers.

In conclusion, running a contemporary Linux distribution on an old netbook like the One A120 can be a challenge, but with a bit of research and realistic expectations, it is definitely possible. Writing texts, or checking network stuff, maybe a valid use case and works well enough—although it’s likely even better on similar hardware with a less cramped keyboard than the One A120. Antix with IceWM is lightweight, customizable, and optimized for older hardware. So, if you have an old netbook lying around and want to put it to some use, give Antix a try. You may even be pleasantly surprised by the results.